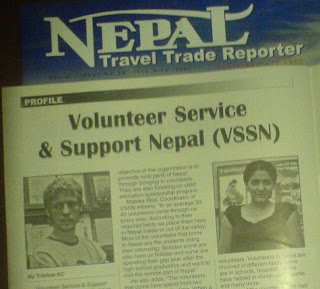 He also adds, “The volunteers that come here spend from two weeks to two months time. When a tourist comes as a volunteer he/she is able to see the real picture of Nepal, which cannot be observed as a tourist. They get to know about the nature and culture of Nepal more clearly and closely.” Besides VSSN there are other organization as well that have been involved in bringing in volunteers. Volunteers in Nepal are involved in different fields some are in schools, hospitals: some have helped in construction works and many more.
Some of the volunteers that had come thought VSSN are these days involved in the health post Chapaganu VDC, Lalitpur. Aarthi Rao (click here to view picture album from Aarthi Rao) from Pittsburh is a student of public health. Similarly Erin Adams from Ohio and Aditi Mallick from Florida are doing their pre- 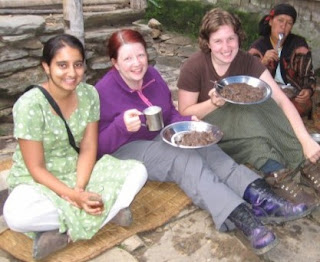 Rao says, “I was searching in the internet and found Nepal to be suitable place for me. I had already been to Kenya and Mexico previously so I wanted to know something about Asian country and I chose Nepal. Another reason was that I always wanted to be in Himalayan country and Nepal was one of them.”She also ads, “”I and Erin had been to Ghalegaun, Pokhra and Chitwan was a fun trip for us and others we visited in the course of our job assignments. As we reached Pokhara in the end of the tourist season, we did not find much people there. The place was very quit and Chitwan was also not much crowded. It was a good place to relax and after our work, it was a good break for us.”
Similarly, Erin Adams states, “I also came to know about Nepal through internet searching. I was interested to learn about the public health in the South Asian countries and also I was looking for a better destination. When I came to know about Nepal I wanted to visit here but due to the travel warnings, I got bit confused. However I decided to make it here. In fact, my mother still doesn’t believe that I am in Nepal.”
She also adds, “US citizens are very much concerned about the safety and security but it has not bothered me at all here. I am strolling freely without being cautious. We are feeling very safe. One of the major reasons for me to visit Nepal was also to develop link with Nepal and send in more other volunteers in future days to work in public health.”

For all of these volunteers, it was their first time in Nepal and they said that they liked the country so much that they would come back with other friends again. One of the volunteer Aditi Mallick recommended two people and thy are already here in Nepal. Besides during bandhs they didn’t have to face any difficulty in Nepal. Adams added, “We got stuck in the ‘bandhs-(strikes)’ at times during our visit out of valley but I think that was not a big problem for us.”Aditi Mallick another volunteer says,” It has been here so I have not visited out of valley but soon I will be. My experience being in Nepal has been very good so far. I have been to India and compared to that I find people are nicer and for a single female it is definitely a safer place. I think language is also very important so we are learning Nepali too.” 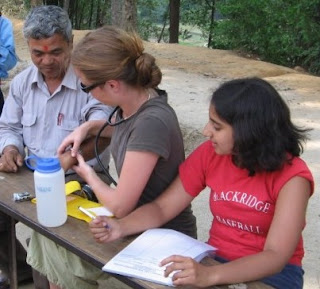 She adds, “I had always wanted to visit Nepal as it is a Himalayan country. I am very much interested to go for a trek and will definitely come for it. This time I am going for rafting soon.”
VSSN also informs that the tourists who visit Nepal as a volunteer mostly visit remote places. Their contribution has helped a lot in the community that they are involved with. They help to carry the positive news of Nepal to the outer world and they also play a role of responsible tourists. Jake Newcomb also a volunteer had just arrived to Nepal. He is also staying at Chapagaun health post. He shares, “It has just been four days I arrived here so do not have much experience but till date it is going on fine. I learned few Nepali words and eager to learn Nepali language.”He also adds, “I had been to Dharamsala, India 10 years ago and got very much interested in Buddhism. So to take a break from the western culture I chose to visit Nepal. I will be staying here till August and will visit mountains for trekking.”
The volunteers also help with the donations to their respective fields. Ram Krishna Prajapati, the in-charge of the Health post at Chapagaun says, “In a year 20-25 volunteers come and serve in the health post. Most of them are the students and we help them provide the necessary materials. They are very happy to see the Nepali society and culture and stay being a part of the community.” He further adds, “A group of foreign volunteer also helped us in erecting a wall. Similarly they have also donated some medical equipment to our health post.” 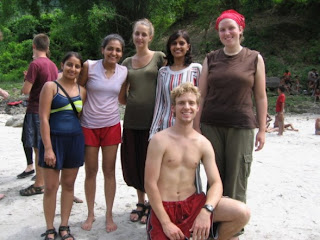 The volunteers play a great role in terms of promotion of a country. And the organization like, VSSN has also helped to promote the country’s local food, culture, ethnicity and most importantly people at their simplest form through the volunteers of different parts of the world. The survey has shown that these volunteers have played a great role of the ambassadors in promoting the countries tourism as will as to enhance the people to people relationships.
Reporter Ms. Trishna K.C.
Email: volnepal@gmail.com
Website: http://www.volunteer-nepal.org
Posted by Matrika Rijal at 1:20 PM